The Council of Ontario Universities (COU) is pleased to present Bonnie M. Patterson with the prestigious David C. Smith Award; for her longstanding commitment to Ontario’s universities, passionate advocacy on behalf of students and outstanding contributions to innovative policy in teaching and research in higher education.

“In four decades of service to Canada’s universities, Bonnie Patterson has been a passionate advocate for students and a dedicated champion of higher education,” says Patrick Deane, Chair of the Council of Ontario Universities and President of McMaster University.

“Throughout her career, she has demonstrated immeasurable dedication to helping our students reach their full potential and to fostering a new generation equipped to succeed in the changing workplace of the future.” 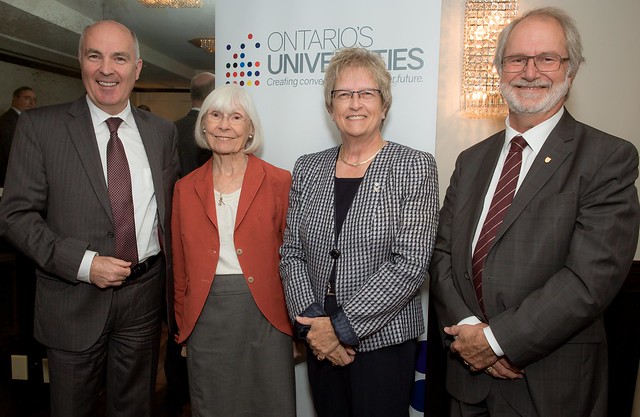 During the award ceremony, Patterson delivered a thought-provoking address on the future of university policy, leadership and alumni engagement. “This is a wonderful honour this evening that is particularly meaningful to me having known David Smith for many years,” she says.

(As leaders in the sector) we need to create a variety of channels for innovative thinking, experimentation, and take advantage of our opportunities for cross disciplinary thinking about big issues of the future…We all want to “enable the extraordinary” for our students and are committed to a continuous effort to advance common high quality standards in Ontario.”

“Bonnie firmly believes a postsecondary education is a critical component of the social and economic success of both our students and our province,” says COU President and CEO David Lindsay. “As Ontario’s universities continue to engage Ontarians in a conversation about their expectations for the future, we are inspired by her tremendous contributions to the sector and our leaders of tomorrow. It is an honour to present her with this award.”

This award was established in 2000 and named to celebrate the late Dr. David C. Smith, who made enormous contributions to both scholarship and public policy in higher education as Principal of Queen’s University and in advisory work on behalf of the sector.

COU is the voice of Ontario’s universities, promoting the value of education, research and innovation that leads to social, cultural and economic success.

Learn how Ontario’s universities are partnering for a better future for students, communities and the province.