Patterson: Don’t be betrayed by destinations 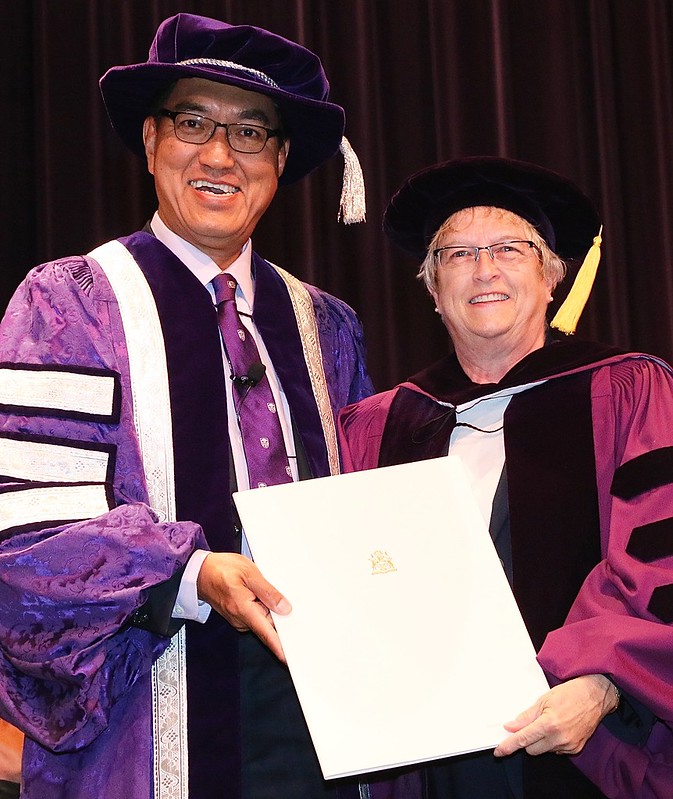 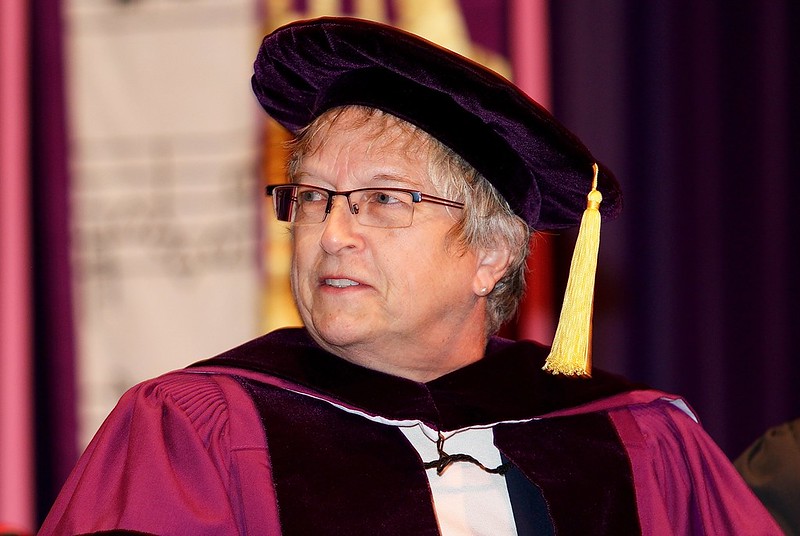 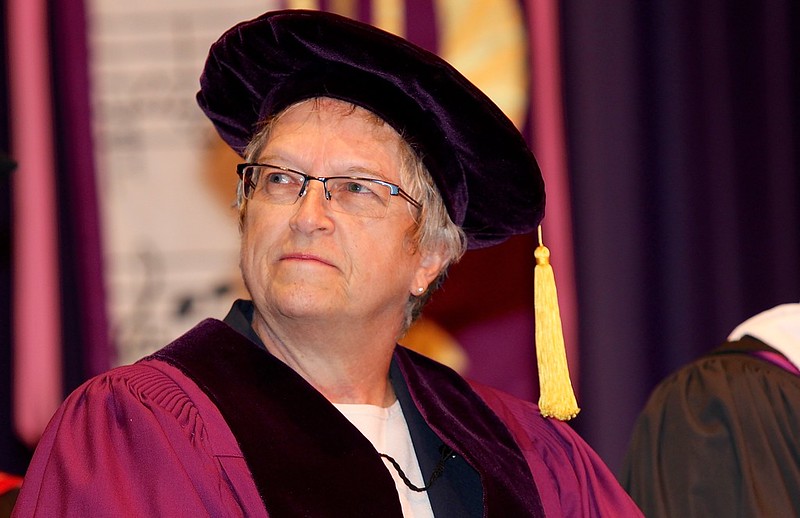 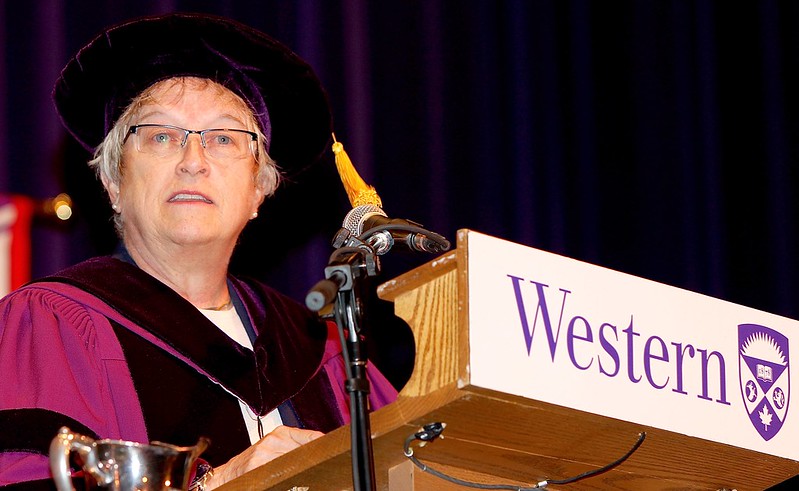 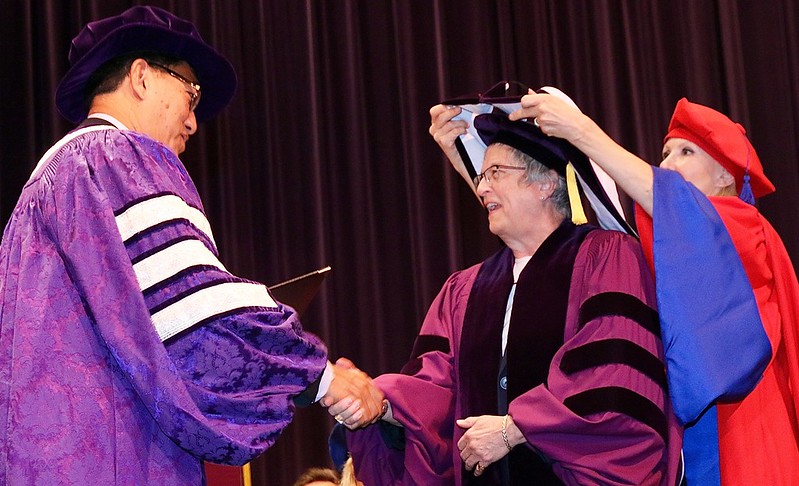 One of the greatest gifts in life is the ability to learn, said Bonnie Patterson, President and CEO of the Council of Ontario Universities (COU).

“You’ve learned to learn – in familiar contexts and in new situations, and that is a gift for life. Allow yourself to challenge this ability and use it on your journey in life and in your career,” she said.

Patterson spoke to graduates from the Faculty of Education and School of Graduate & Postdoctoral Studies at the Friday, June 12, morning session of Western’s 305th Convocation.

Western conferred an honorary Doctor of Laws, honoris causa (LLD), upon Patterson in recognition of her successful career in leadership within the academy and the community.

“My university experience provided me choices and opportunities I otherwise would not have had,” she told the graduates.

A champion for postsecondary education and university research, Patterson is currently serving in her second term as president and CEO of the Council of Ontario Universities. She is an accomplished teacher, scholar and academic administrator who earned her BA and Master of Library Science at Western, where she stayed on faculty 1975 -80 in what was then called the Department of Administrative Office Management.

Patterson also previously served as the president and vice-chancellor of Trent University for more than a decade, after her first term as COU president from 1995-98 and she was Canada’s first woman Dean of Business, a position she held at Ryerson University from 1990-95.

“My university experience provided me choices and opportunities I otherwise would not have had,” Bonnie Patterson, president and CEO of the Council of Ontario Universities (COU), told graduates at the Friday, June 12, morning session of Western’s 305th Convocation.

Patterson’s community involvement is broad and includes currently serving on the Board of Directors for Metrolinx, chairing the board of The Roberta Bondar Foundation, being member of the Board of the Ontario Chamber of Commerce, and the advisory board for the Mowat Centre for Policy Innovation. She has contributed to several provincial advisory committees, including the Health Industries Advisory Committee on Sectoral Strategy Development and the Biotechnology Commercialization Centre Fund. She has also served as a provincial representative on the founding Board of the Greater Toronto Airports Authority.

As they continue learning, graduates must remember that the ability and privilege of an education available to them is not available to all, Patterson added, noting the difficulties girls and young women face in developing countries.

“What we accept as a given does not apply everywhere in the world. That’s why universities matter, and why we must internationalize the student experience,” she said.

Patterson has received much recognition for her accomplishments, being named by the Women’s Executive Network as one of the Top 100 Most Powerful Women in Canada in the Trailblazers and Trendsetters category, and receiving the Queen’s Diamond and Jubilee medals. She is as a Member of the Order of Canada and the Order of Ontario.

In her citation, Western Provost and Vice-President (Academic) Janice Deakin touted Patterson’s accomplishments, noting they’ve been plentiful in every role she held.

“As president at Trent, she was praised for her tenacity, resilience, respect, enthusiasm, openness to ideas, and her unflagging dedication both to the university and the City of Peterborough. Among Bonnie’s achievements at Trent, she was instrumental in launching new professional programs in education, nursing and forensic science. She helped raise more than $30 million through fundraising campaigns,” Deakin said.

“What we accept as a given does not apply everywhere in the world,” Bonnie Patterson, president and CEO of the Council of Ontario Universities (COU), told graduates at the Friday, June 12, morning session of Western’s 305th Convocation.

“And she oversaw the creation and opening of several new facilities, including the Peter Gzowski College-First Peoples House of Learning, and the award-winning Chemical Sciences Building.”

Learn something new every day. Challenge yourself to work outside your comfort zone, Patterson added. Find your passion. Enjoy the journey; don’t be betrayed by destinations.

“And remember the Wizard of Oz. You have a heart. You have a brain. And you have courage. You hold all of the attributes of emotional intelligence waiting to be applied to be a true leader.”

Also during the ceremony, the title of professor emeritus was conferred upon Education professors Gregory Dickinson and Allan Pitman.

Learn how Ontario’s universities are partnering for a better future for students, communities and the province.